I’d like to tell you a short story. Don’t worry, it has a happy ending. But the ending is, really, only the beginning.

November 2008: I began writing my first novel. I wasn’t sure I could write something that long, but I made it through. That story is rightfully buried in the dark recesses of my hard drive, but I learned so much writing it.

February 2010: I sent my first query for my second novel, a YA UF called The Demons You Know.

2010: I had this conversation with my best friend, an avid reader, many times over:

October 2010: then this conversation, while we were carving pumpkins:

Me: Do you know what my comp titles for The Demons You Know would be?
Her: *with gusto* DRAGONS ARE PEOPLE, TOO!
Me: I don’t think I’ve heard of that one…
Her: I just made it up.
….
Me: I could write that.

April 2011: I finally gave in to that snarky little voice in my head and started putting Kitty’s story to paper.

October 2013: I sent the first query for Dragons are People, Too

Today: I get to announce that I’ve signed a publication contract for Dragons are People, Too with Entangled Publishing!!

This day has been so long coming and there were many days I thought it might never come. There are so many people without whom this could have never happened. I am so thankful for all the agents, editors, and authors who have shared their knowledge with me over the years and welcomed me as a friend. My friends and family who have supported me over the years, despite not completely understanding the craziness I went through sometimes. There are literally so many people I could thank that writing this post would take me all day and I’d still miss some. So, for now, I’ll say thank you. Most of you know who you are. And if you don’t, I’ll make sure to let you know over the next few months. I couldn’t have done it without you.

And since I’m so grateful for everything everyone has so freely given me over the past few years, I wanted to pay it forward! I’m giving away four sets of four books, available to US only. BUT, since so many people who’ve helped me along the way have lived overseas, I’m also doing an international giveaway! Check out the prize packs below and enter to win via the rafflecopter. 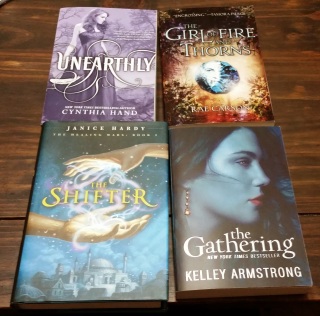 Choose any two of the following books and I will send them to you as long as Book Depository ships to your country! (All these are friends and/or people who have helped me along the way!!)