I have been promising these for a while – but between Christmas and moving (who, exactly, decided that was a good idea, hm Sarah?), it got a little delayed. But I promise it was worth the wait! Before we get to the pretty, pretty graphs, a few important caveats:

No big surprises there, I think? One gentlemen wanted to know how outnumbered were the men, exactly? 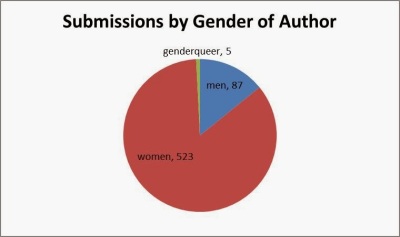 That’s 85% female and 14% male. Later, you will see how this was distributed in each category. Care to guess which category had the most male authors?

Since it’s not obvious by looking at it, the next graph shows how many applicants submitted to 4 mentors, 3 mentors, and so on. 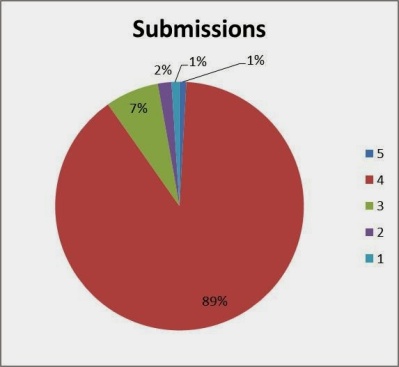 I thought it might be interesting to see how many of our applicants have been published before – and how.

Now the question (which I will answer later) becomes: were previously-published applicants more likely to snag a mentor?

There were many applicants who have been published in short fiction and short non-fiction, and those will be included in the “published” slice of the “Submissions by Publishing History” chart.

My friend asked to know the locations of the applicants. 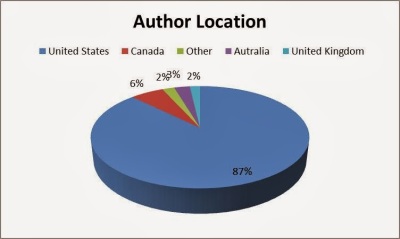 The most-represented states were California (57), New York (43), and Texas (26). No surprises there, as well. What is surprising, however, is how many people who live in Minneapolis insisted on saying that instead of Minnesota, when I specified to put your state if you lived in the US! I’m chalking it up to some extreme city pride. (Please note: UK includes those who indicated they lived in the UK, England and Ireland)

Later, we’ll find out which category’s authors were more likely to interact on twitter!

Most of the category-specific stats will be presented without commentary. 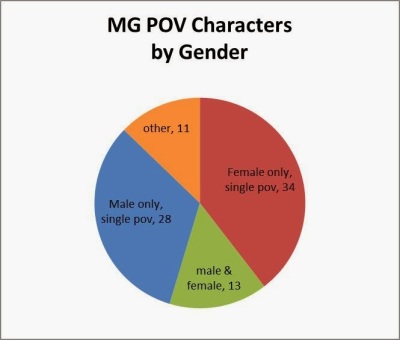 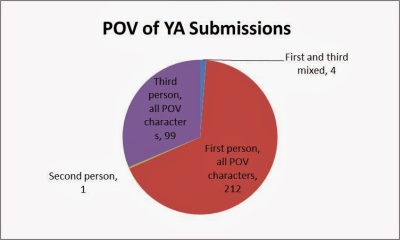 It was at this point I realized it’d be interested to see how the categories compare in terms of tense, first vs third, and POV genders. Those comparisons are presented later.
New Adult 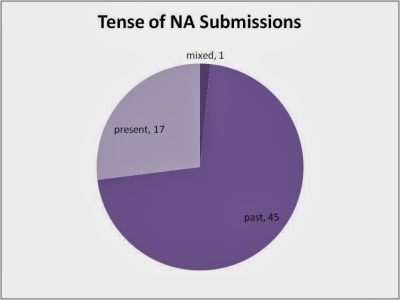 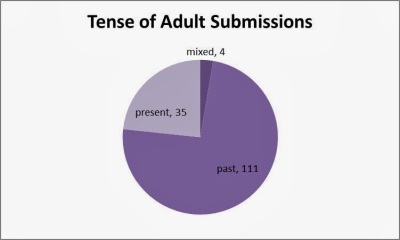 Category Comparisons
It’s said that YA books are more likely to be in 1st person present tense than most other categories. Is that true? 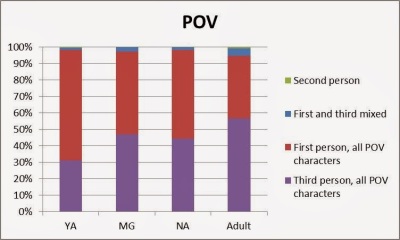 First person? Check! And Adult entries are more likely to be told in third person. 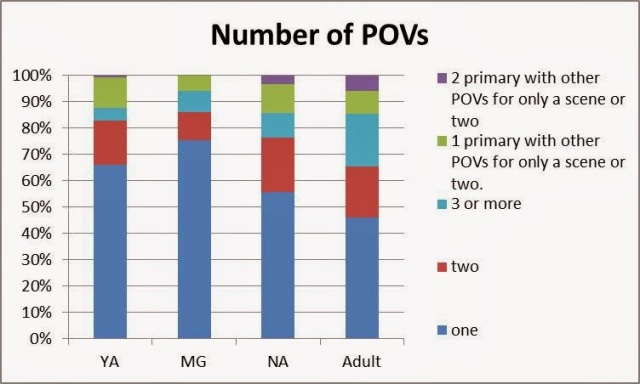 It seems one POV is pretty dominant in Middle Grade, but makes up less than half of our adult submissions.

How about POV character genders?

Nearly 60% of the YA entries were told in a single female POV.

Middle Grade entries had the highest percentage of stories told from a single male POV, at 33%. Not surprising, considering…

Update: The above key is incorrect. Female authors are represented by the red color.

Now I know many of you are just dying to see where the categories stack up in terms of genre. Let me first say, that genre is a hard segment of data to collect. Unlike the stats with my previous post, I simply took the word of the author on their genre, which can be a bit dodgy, as I explained in my previous post. I am also very upset with myself for not including a selection for “paranormal romance.” A few people wrote it in, but I’m sure many more checked the “Urban/Contemporary Fantasy” box instead.

With all that said… here you go 🙂

If you’re interested in a specific genre, please let me know in the comments. I couldn’t make this information very visual if I included all genres. I will add, since it’s useless in all categories except for “adult” that 23 or 14% of the adult entries were Women’s Fiction.

The below chart includes all genres, divided into those that have speculative elements (fantastical or science-fictional) and those that don’t.

It seems speculative fiction is strong in YA and MG, but peters out in NA and Adult.

I asked the authors to identify if their manuscript was any number of things on a long list. These were the most frequently selected.

Here’s a question that could start a twitter gang war. Are the authors in one category more or less likely to commit two Query Faux Pas in their submission?

It seems NA authors are fonder of the rhetorical questions than the others… The question that will be answered later is: does committing one (or both) of these affect your chances of being picked by a mentor?

Please note: “international” means partially or fully taking place in a country outside of those mentioned. A submission could have (and many did) fall in both the “US” and the “imaginary” category (for example: a faerie-underground of Chicago).

Which category’s authors were more likely to chat on twitter about #pitchwars? 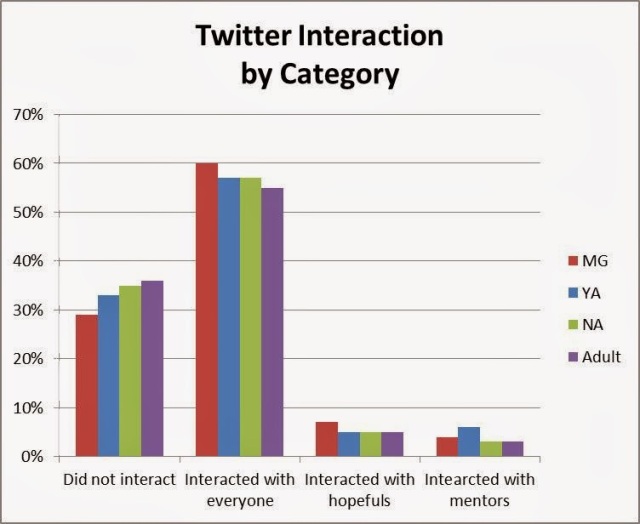 It would seem MG authors are more social, but only by a little.

Update: POC stats include characters that were at least half of a non-white ethnicity.

Of those POC POV characters, which ethnicities were represented the most? 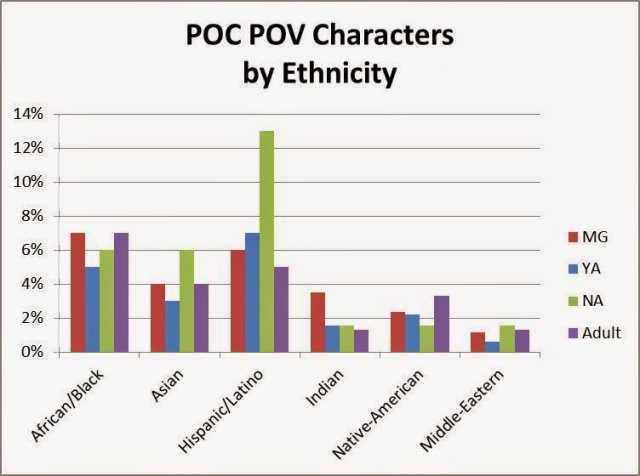 It seems the NA submissions have a fondness for Hispanic characters.

Now let’s take a look at LBTQ characters in the submissions:

Feel free to discuss in the comments, but keep in mind I have no more information than what is displayed on this chart.

Now on to some of the less-often discussed diversified classes. (Thanks to Marieke Nijkamp for helping me fine-tune some of these questions. All mistakes are mine.)

Please note: I did not attempt to describe “neurodiversity” in my survey, assuming authors would know the term if they were writing a neurodiverse character. Neruodiversity includes: the autism spectrum, ADHD, Dyslexia, Tourette’s and more.

I also did not provide guidance on how to determine if a character has a mental illness. I did, however, answer a question on twitter, indicating that normal grief after a loved one’s death should not be considered a “mental illness” unless it ventured into clinical depression.

Again, I did not provide guidance on the definition of “disabled.”

Now you’re thinking, “Yeah, yeah. This is all well and good, Sarah, but what about the winners?” Wonder no more…

As stated above, “picks” include the mentees and the alternates. This includes 151 submissions.

The below graph somehow missed out on getting a title, but it’s a simple representation of what percentage of applicants were a certain category versus the percentage of picks in the same category. 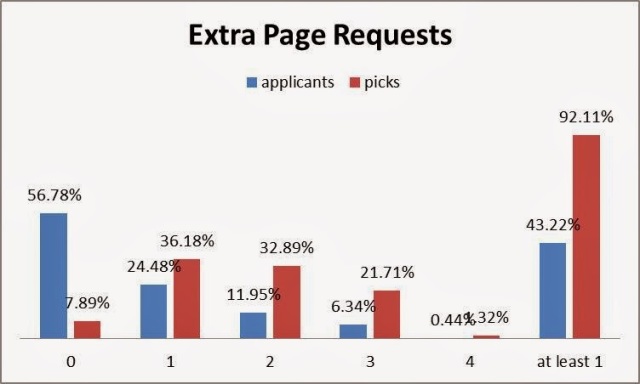 This was just something I was interested in seeing: How many applicants personalized their queries? And how much of an effect did it have on being picked.

It seems there wasn’t much of an effect and the difference shown here might actually be a bit misleading. I can speak only of my own inbox, but I received many queries that didn’t follow the submission guidelines completely or didn’t follow standard query format (e.g. not telling me what the book was about). None of these were personalized, so … do with that what you will.

We saw above that 37% of applicants had been previously published and wondered if that had an effect on being chosen by a mentor. The answer might surprise you… 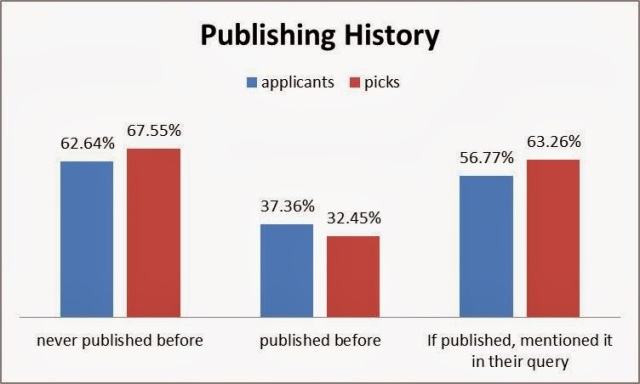 However, it seems as if those who mentioned their publishing credits in their query did have a slightly higher chance of being picked.

Finally, we saw how many applicants committed one of two distinct query faux pas and wondered how that might affect their chances… 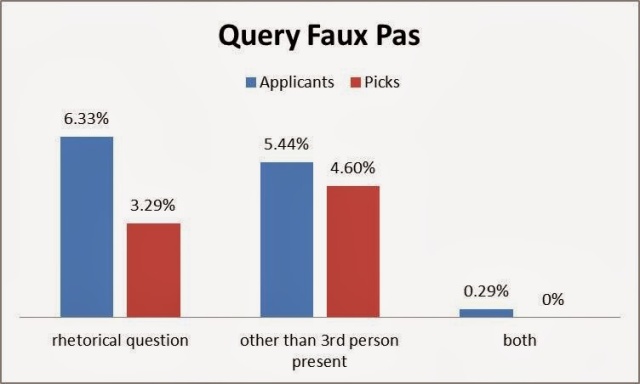 Ok, that’s all I have for you now.

Many thanks to the #pitchwars applicants who filled out the survey! 91% is a super-impressive response rate and I couldn’t have done it without you. Also, many thanks to Brenda Drake and her team for hosting the contest!

If you have any questions that I may be able to answer, please post them in the comments. I’ll answer them if I have the data available. 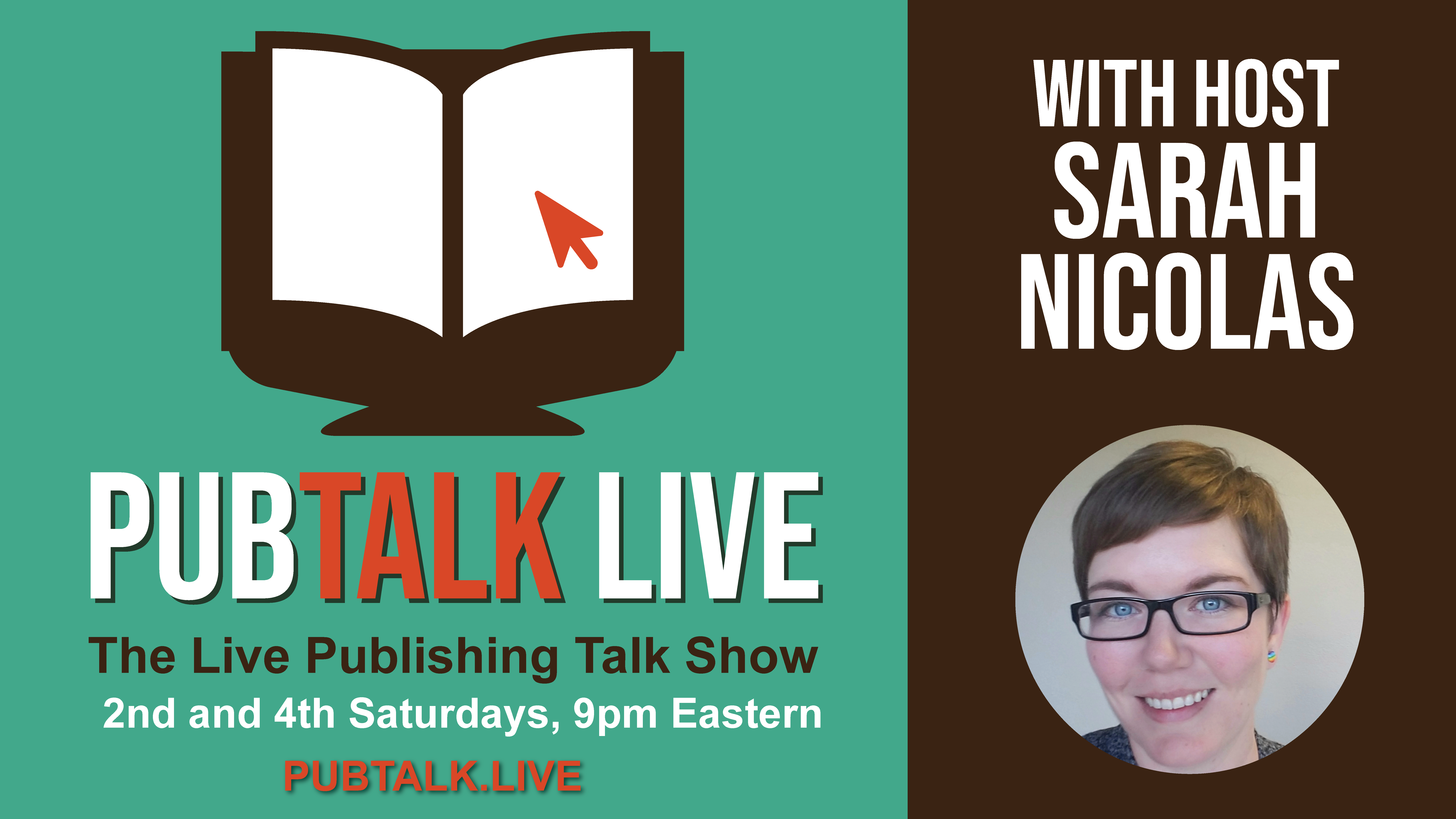